Evolution of a religious movement

ROME – Demonstration against ostracism and shunning

Hereafter is the summary of a debriefing of the demonstration held in Rome against the Christian Congregation of Jehovah’s Witnesses, as posted on the JW Discussion forum on December 6th, 2010.

On December 1st, a relatively large group of ex-Jehovah’s Witnesses and supporters of human rights held a demonstration in front of the Italian Parliament in Piazza Montecitorio, in the capital city of Italy, ROMA.

The manifestation sprung from the reaction of many of those who have been disfellowshipped or expelled by the governance of the Jehovah’s Witnesses cult and who, following the instructions of the Watchtower leadership, have been shunned not only by their ex worshipping fellows, but even by the members of their own family.

Shunning is an old weapon used by the Watchtower Leadership against those who stop sharing their views on religious matters and if a demonstration was all that was required to alert the public opinion about it, then it should have been acted upon very long ago.

The reason why the demonstration took place NOW rather than in the past is because the Italian Parliament is about to approve a law which would grant the Watchtower even more religious freedom and privileges than what it has enjoyed up to now, including the right to receive from the Italian State their share of the 0.8% of the income tax revenue paid by the Italian tax payers.

While Jehovah’s Witnesses, as an organization, already enjoy a large amount of religious privileges in the country, they claim for themselves from the State the same rights granted to the Catholic Church and other recognized religious denominations. But, contrary to those other religious movements, only Jehovah’s Witnesses violate the human rights granted by the UN Charter, the European Union Charter and the Italian Constitutional rights by shunning those who decide to leave the movement, instructing their members to totally discriminate socially, secularly and even family wise, their ex members.

The objective of the demonstration last Wednesday was to alert the public opinion about the issue and, because the place where it was held, alert the Italian Parliament about the law they are about to approve in favor of the Watchtower. The demonstration followed the hundreds of letters sent during the last three months by many ex Jehovah’s Witnesses and other supporters of Human Rights, directly to individual members of the Parliament or to the whole Parliamentary Commission for the Constitutional affairs.

What can be said about the demonstration itself; was it a success or a failure?

When you consider that, without too much of a promotional effort, a large number of people travelled hundreds if not thousands of miles to Rome from different Italian regions, by car, train or airplane, then it was a success. And if you add to these, those who came from France and Switzerland to support those who have been shunned by the Organization, then the demonstration was a success.

When you consider that it was held, not during a week-end, but in the middle of the week, when people had to take time off their work to attend, then you can say that it was a success.

When you consider that the weather that day was not one of the best, not even for Rome, then knowing that these people had to be standing for four hours under the rain to protest against the discrimination taught and enacted by the Watchtower Organization, then it was a success.

If you consider that over 1000 tracts, explaining the internal rules of this Organization forcing their members to discriminate those who want to make use of their human right to quit a religious movement, were distributed among bystanders and passerby, then it was a success.

If to these you add the 200 stickers with the ‘NO OSTRACISM’ sign were distributed among the participants, who exhibited them on their back and shoulders, then the demonstration was a success.

But maybe the most important factor that we have to consider is that, NEVER BEFORE in Italy, people gathered to demonstrate against the Watchtower. This FIRST TIME EVER demonstration was a real success.

Two speakers spoke at the gathering. First to speak was Achille Aveta, an ex Jehovah Witness who was disfellowshipped about thirty years ago to have defended, as an elder elder Term used by Jehovah’s Witnesses to designate a spiritual leader. , the right to live of a young girl in the congregation suffering of thalassemia, also called Mediterranean anemia. Achille, who is one the Italian translators of Ray Franz’s and Jim Penton’s books, gave an explanation of the internal rules of the Watchtower Organization which force their members to shun those who are expelled from the movement. He went on explaining why the law, promoted by the Watchtower and contemplated by the Italian Parliament, violates the Italian Constitution and the Human Rights Charter of the UN of 1948, subscribed by the Italian government.

It was then my turn, to bring to the audience the international aspect of the issue. Ray Franz and the Andersons experience in this respect was recalled. Then the demonstrations which went on recently in Brazil triggered by the court case brought up by Sebastian Ramos. And finally, the emblematic Belgian court case which sees an ex Jehovah’s Witness taking to court the Christian Congregation of Jehovah’s Witnesses of Belgium because of the prejudices suffered due to the discrimination teachings of the Watchtower Leadership against its ex members, closed the talk tour, encouraging the demonstrators and whoever supports the Human Rights, to join me for the final trial which will take place in Belgium on this case next spring.

Before the demonstration a young man recently disfellowshipped for apostasy, was heard for about one hour on one of the Italian Radio stations (Tele Radio Stereo) on the evening of November 25th, 5 days before the demonstration took place, to explain the reasons of the decision to protest against the law discussed at this time by the Italian Parliament. He was well placed to talk about the subject as he was disfellowshipped recently and his whole family of parents, brothers and sisters has shunned him, not wanting to see him anymore.

Before the demonstration was over, both Achille Aveta and I were interviewed by the journalist of the “La Republica”, one of the largest Italian newspaper.

In essence I would say that the demonstration was a real success. Many of the participants have shown their interest to join me in attending next Spring the final court case against the Watchtower in Belgium.

I frankly believe that if we form an international movement against the discriminatory teachings of the Watchtower, this issue may become a real problem to the Watchtower Organization who tries by all means to attract the favor of the national governments to their advantage, and be of warning to all those who may contemplate joining the cult that the question of the human rights discrimination is as serious as the Blood and the Pedophilia issue which need to be made public.

I will add more information about the Belgian case on this site, to know where we stand with this case and what can be done to support the ex Jehovah’s Witness who dared to sue the Watchtower on account of their discriminatory teachings against those who want to use their right to leave this religion. 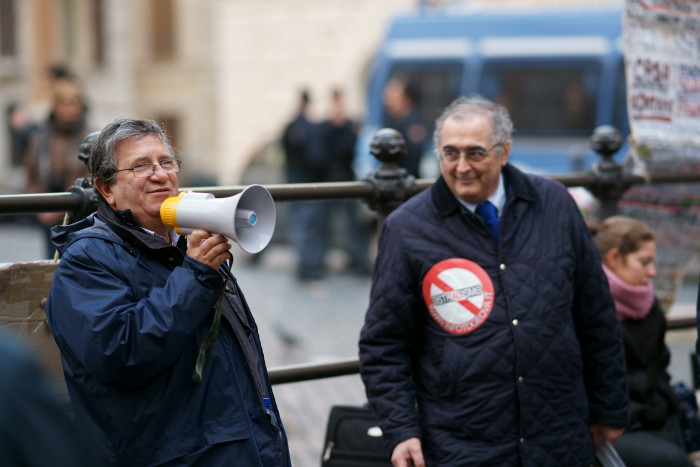 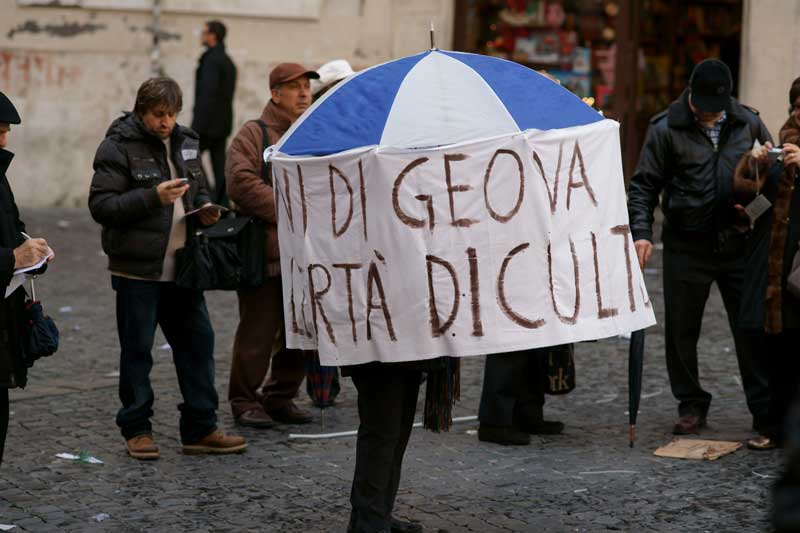 one of the demonstrators with a banner surrounding the umbrella

"No 0.8% to Jehovah’s Witnesses - They violate the freedom of religion" 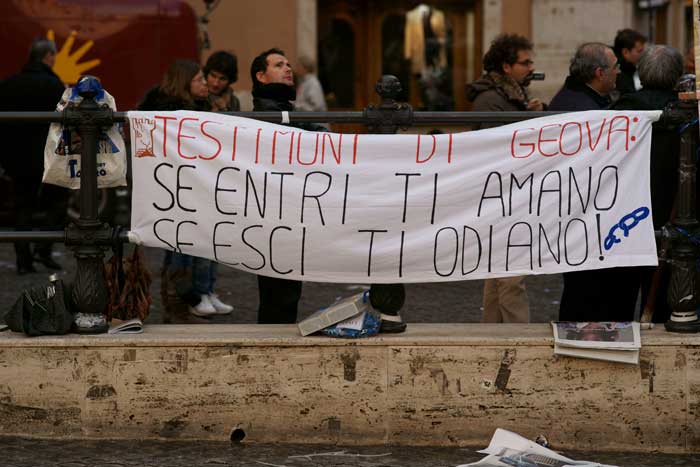 one of the banners

"If you enter the movement: they love you - If you abandon it: they hate you"

Reply to this article